On the first week we decided to start with something simple – Tic Tac Toe. Or so we thought. While the code team fought to implement functional version control, the graphics team worked double time and finished their work early. The code team worked triple time, and… then worked some more. Moral of the story: Do not make Tic Tac Toe on your first week of 5D5. The game had several themes, initially, complete with final graphics, but for simplicity they were reduced to one set of game elements and several backgrounds. An AI was discussed, but not implemented. Sounds were made on a whim by a graphics team member. It was decided that this was a beneficial arrangement that could continue for the later weeks. Eventually the game was finished with turn-based gameplay and a single set of game elements, a switchable background image, sound on/off (including music) and hand-drawn graphics by Viivi Koponen. 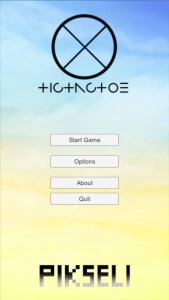 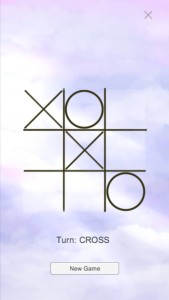